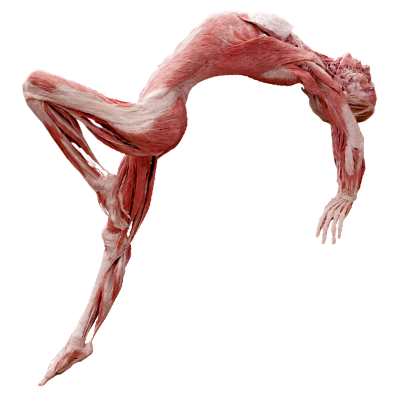 BODY WORLDS aims to educate a broad audience about the different aspects of the human body. From functions and development to diseases and the influence of operations. BODY WORLDS wants to share its knowledge with everybody through the exhibition and generate curiosity for anatomy and physiology.

In the city centre of the capital of the Netherlands, you’ll find BODY WORLDS Amsterdam. This must-see exhibition of the human body is a not only fun but also educational. Here you go on a fascinating journey through the human anatomy. You'll explore the things that make us happy and the effects of that happiness on our health.

The 200 anatomical specimens of real human bodies in the exhibit show the complexity, resilience, and vulnerability of the human body. They show how our organs work, and the effect of common diseases and habits like smoking.

When you have entered the building on the lively Damrak street, you will first step into the elevator, which takes you to the sixth level. From there you descend level to level till you reach the end of the exhibit in the basement. Each level is dedicated to a different aspect of the body.

BODY WORLDS is the only exhibition in the world to be based on a donor programme. People can apply for this programme and then indicate that their body, after death, may be used for medical science and education. Most of the full bodies come from this donor programme.

Only a few organs, foetuses and specific preparations that have noticeable deviations come from old anatomical collections and institutes. It has been agreed with the donors that their identity and cause of death will not be shown. Currently, there are 19,000 registered donors in the Body Donation Programme of the Heidelberg Institute for Plastination, which was founded by dr Gunther von Hagens in 1993.

MUST SEE IN AMSTERDAM

There is so much to do in Amsterdam, it can be hard to choose. BODY WORLDS Amsterdam offers something different for the entire family. Gunther von Hagens’ BODY WORLDS exhibitions – also known as Körperwelten – have prompted a worldwide revolution.

Never before has an exhibition had such a momentous effect on the way people view themselves and their bodies. Join the 40 million people around the world who have already seen the exhibition and been on this fascinating voyage of discovery through the human body. Book your visit now!

Discover the secrets of the human body

BODY WORLDS wants to share its knowledge with everyone and generate interest for anatomy and physiology by displaying plastinated real human bodies.

Find out what is happening beneath your skin

Never before has an exhibition had such a momentous effect on the way people view themselves and their bodies.